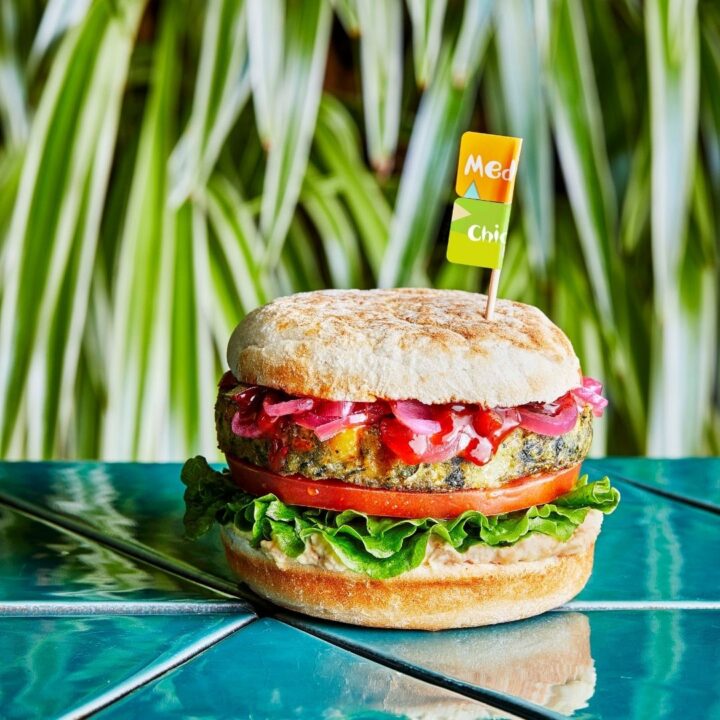 New year, new Nando’s… this month, everyone’s favourite flame-grilled chicken restaurant is launching a brand-new plant based menu item for its veggie lovers as well as bringing back a selection of fan favourites, by popular demand, to kick-start the New Year in PERi-PERi style with not one but two new menus changes.

Available in NI from 5th January, coinciding with the launch of Veganuary 2022, Nando’s will be adding to its ever-expanding range of plant-based menu items with the launch of its new and delicious Spiced Chickpea Burger, guaranteed to spice up the menu for those looking to go meat free in Jan.

Served in Nando’s famously soft, sweet roll and priced at just £7.55, the burger contains a tasty chickpea and spinach patty, with hints of cumin, coriander and turmeric – loaded with houmous, red pepper chutney and topped with red pickled onions.

Nando’s Spiced Chickpea Burger will be joined by the return of the restaurant’s original fan favourite Mango & Lime PERi-ometer spice which will be landing on the PERi-ometer for a limited time only, replacing Nando’s seasonal Clementine spice.

And if that wasn’t enough to tickle your tastebuds, later this month in a second new menu launch Nando’s will also be bringing back one of its fan favourite menu items: a new and improved Portobello Mushroom & Halloumi Pitta, now featuring a delicious combination of chilli jam, wild garlic aioli and lettuce, priced at just £7.55, landing on 25th January.

In addition to these veggie favourites, for those partial to a refreshing cider, Nando’s has also added a sweet & sour SXOLLIE Cider – offering a hint of toffee apple.

Born with sustainability at its heart, SXOLLIE Cider aligns with Nando’s values to bring the heat to the plate, not the planet – being environmentally-conscious, and helping to mentor young people and aid the economic development of Nando’s homeland of South Africa.

Nando’s two new January menus will see the return of some much-missed meat free fan favourite as well as broaden the restaurant’s plant-based offering – giving more choice to customers whilst contributing towards a greener planet. The restaurant is committed to becoming Net Zero by 2030 and having recently celebrated its first milestone becoming carbon-neutral across its Scope 1, 2 and 3 emissions in November.